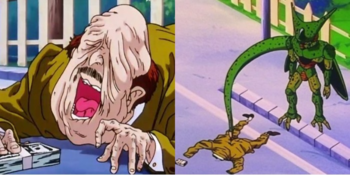 "In the end, when I'm the victor...I will kill every single human being on this planet. I'll come methodically after every last one of you, and I'll watch your faces twist with fear."
"Nothing can stop me now!!! I can enjoy the death and suffering of all living things to my heart's content!!!"
—Super Buu, Manga

The Dragon Ball franchise is the Trope Codifier for modern shōnen action series, including its villains. Most of them are Card Carrying Villains who do things out of the heck of it, but not too evil. And there are some who were created evil and do some questionable things. Then there are the few who are so twisted that they are memorable for being so ungodly demented and cruel and lacking the morals/mercy of their fellow villains, who are either horrified and can't do anything about it or actually admire the person due to their overwhelming power.