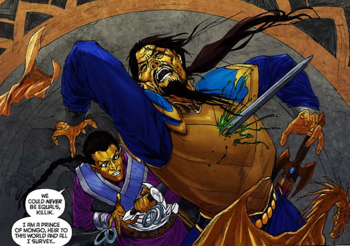 "I like to play with things a while, before annihilation."
"I could atomize you! Or have bore worm maggots eat you from the inside out! Or push you through an airlock in high orbit and watch your blood boil in the vacuum!"
—Ming the Merciless, Flash Gordon: Zeitgeist
Advertisement:

Since 1930, Flash Gordon has faced his fair share of malevolent aliens and magic users. Some of these, particularly Ming the Merciless, manage to stand out as the worst of the worst.