Character subpage for Androids 17 and 18. For their Future counterparts, see this page. 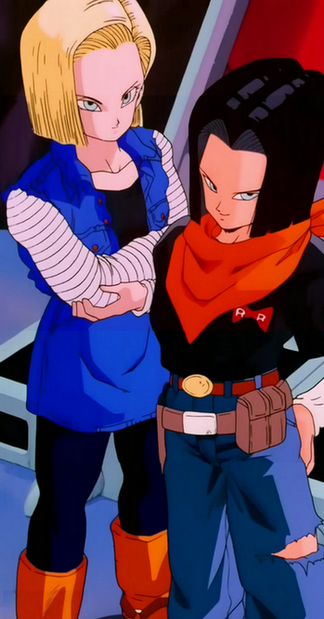 Two androids created by Dr. Gero to kill Goku. They end up being activated prematurely, then turn on their creator and destroy him. They're actually cyborgs, as it's stated a few times that they were originally human teenage twin runaways kidnapped and experimented on by the old man.
Advertisement:

Future Trunks travels to the main timeline to warn the Z Fighters about how, in the Future Timeline, the Androids go on a rampage across the Earth, causing destruction and chaos, with even the Z Fighters ending up dead at their hands, leaving Future Trunks the only one capable of stopping them. However, in the main timeline, they're more subdued, deciding to only focus on finding and fighting Goku — 18, in particular, seems to hardly care about fighting at all and only does so when she finds an incentive to. The reasons for this are unknown, though Future Trunks theorizes that it's some kind of side effect from his time travels, the anime adaptation of History of Trunks implies that due to Future Gero's plans for world domination, he programmed them to have a hatred of humanity so he could then manipulate them into aiding him in conquering the planet, creating the possibility that Dr. Gero modified 17 and 18 further in the Future timeline than in the Main one. It's also possible that their interactions with Android 16 (as well as the fact that they take a purposely long amount of time to find and kill Goku, who survived in the main timeline, compared to the Future one where he died by a heart virus) means that they develop more empathy for other people. The two eventually turn out to be the necessary sacrifices for Gero's greatest creation, Cell, who absorbs them to attain his perfect form. Super Saiyan 2 Gohan ends up quite literally beating 18 out of Cell, and 17 is revived following Cell's final defeat.

After Z, they both take some prominence again in GT's Super 17 arc. In Super, both Androids take part in the Tournament of Power to ensure the survival of their universe.

open/close all folders
In General
Android 17

Dr. Gero's seventeenth android creation and the twin brother of Android 18, designed to serve Gero's vendetta against Goku, however, Android 17 ends up killing Gero after the sibling's rebel against him.

After their initial arc, he makes a cameo appearance in Z's final battle. He makes a return a decade later in Super, working as a national park ranger preserving wildlife from poachers when he is asked by Goku to join Team Universe 7 in the Tournament of Power in the Universe Survival Saga.

Click here to see her in the Buu saga

Click here to see her in the Universe Survival Arc 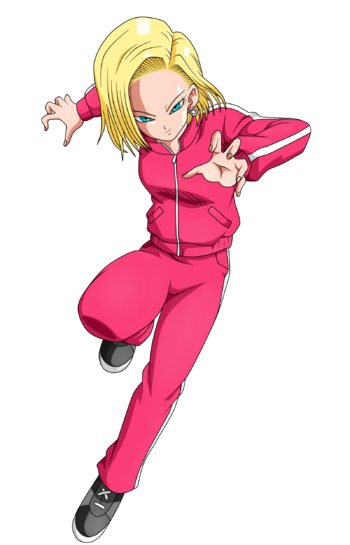 Dr. Gero's eighteenth android creation and the twin sister of Android 17, designed to serve Gero's vendetta against Goku. After the androids' first bout with the Z Fighters, 18 comes across a frightened Krillin and kisses him on a whim. He falls for her after this, and she reciprocates after he wishes away the duo's self-destruct devices, ensuring that they can never be controlled by someone else again. Eventually, Android 18 becomes an on-and-off supporting character after this, becoming a member of the Z Fighters, as well as the wife of Krillin and the mother of their daughter Marron.