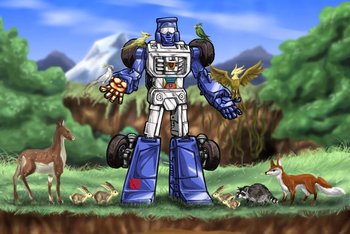 Just one "I Want" Song away from Transforming into a Disney Princess.
"Over the last few days, I have come to feel a great adoration for this planet. From its trees, to its birds, to its people, to its birds."
— Android 16, Dragon Ball Z Abridged
Advertisement:

A sort of stock character where the character is a robot, but is shown to have a huge affinity and appreciation for nature up to potentially attracting animals in a manner not entirely unlike a Disney Princess. The symbolism is obvious: Contrasting the character's artificial origin with nature, perhaps symbolizing that he does have a place in the world. Like Friend to All Living Things it also works a shorthand of the character's innocence and good nature. If the character was designed to be some sort of war machine, this can serve to illustrate their peaceful personality and contrast with their intended purposes. In fact, the trope seems particularly common with robots who have been built as weapons of war. In fantasy setting, the same can be achieved with Golems.

Although Nature-loving Robots are usually portrayed as benevolent, this is not always the case. An "evil" variant of this trope is a robot or A.I. that tries to Kill All Humans in order to protect nature. Expect this to cross over with Gaia's Vengeance and The Computer Is Your Friend.

A common variant pairs the robot with birds, to evoke the imagery of how birds will perch on statues.

May overlap with Gentle Giant depending on the robot's size.

See also I Am Not a Gun, Nature Lover and Friend to All Living Things. May evoke Disturbed Doves if the robot has to fight.