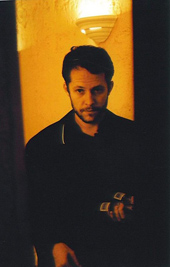 "I'm always cast as the short guy or the evil guy. I guess I have a short, evil voice."
—Chuck Huber, Baccano! DVD Commentary
Advertisement:

Charles Cody "Chuck" Huber (born May 8, 1971 in Chicago, Illinois) is an American voice actor who works for distributing company Funimation, and he was formerly a school principal. He is best known for voicing Hiei in the YuYu Hakusho series dub, but has also voiced Android 17, Garlic Jr., and Emperor Pilaf (Funimation dub) in the Dragon Ball franchise and Shou Tucker in Fullmetal Alchemist and Fullmetal Alchemist: Brotherhood. More recently, he's voicing Dr. Franken Stein in Soul Eater and Ash Landers in Black Butler. Has a rather distinctive cold and somewhat slimy voice, if you want a villain or Anti-Hero who will be respected, get this guy. Also Austria in Hetalia: Axis Powers and Hiro in Crayon Shin-chan.

He's one of the few voice actors from Dallas who managed to get an anime role in the Houston area (Jolly from Arcana Famiglia).

He has a cameo in the Yu Yu Hakusho Abridged version of the Poltergeist Report movie as Reiko.

On the live-action front, he plays Dr. McCoy in the Star Trek Fan Film series Star Trek Continues, opposite two other anime voice actors who have also done extensive work with Funimation (Vic Mignogna as Kirk and Todd Haberkorn as Spock), though he was absent from the first two full-length episodes due to other commitments, forcing creative consultant and fan Larry Nemecek to step in and play Bones instead.