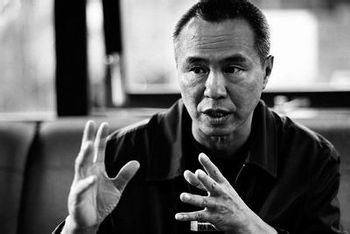 The movie distribution system of North America is devoted to maintaining a wall between you and Hou Hsiao-hsien.
—Roger Ebert, after seeing Three Times at Cannes 2005.
Advertisement:

Hou Hsiao-hsien (侯孝賢) (born 8 April 1947) is a Taiwanese filmmaker. Although he isn't very well-known internationally or even in Taiwan, he is arguably one of the best directors alive. A leading figure of Taiwan's New Wave, he is acknowledged as an inspiration by the members of the Sixth Generation of Chinese directors.

Born in Canton in 1947, Hou moved to Taiwan along with his family the following year as a consequence of the Chinese civil war. As a child, he was fond of movies, classical Chinese novels, puppet shows and traditional operas. A troubled teenager, he engaged in petty crime and hung around at the edges of the Taiwanese criminal underworld; he would later admit that, had he not found his calling in moviemaking, he would probably have become a henchman for some triad.

He studied at the National Taiwan Academy of the Arts and, after graduating, started out in the film industry as an assistant director. He directed his first movie, Cute Girl (就是溜溜的她), in 1980, which would be followed by 17 other films over the next three decades, the most notable being A Time to Live, a Time to Die (童年往事) in 1985, A City of Sadness (悲情城市) in 1989, The Puppetmaster (戲夢人生) in 1993, Goodbye South, Goodbye (南國再見，南國) in 1996, Flowers Of Shanghai in 1998, Three Times in 2005, Flight of the Red Balloon in 2007, and The Assassin in 2015.

Hou's favorite topics tend to be either Slice of Life stories of ordinary people, or dramas dealing with modern Taiwanese (and occasionally Chinese) history, showing how historical events impact the lives of individuals. City of Sadness was particularly notable for broaching what had until then been the politically taboo issue of the repression of native Taiwanese by the Nationalist regime during the Chinese civil war; it earned him a Leone d'Oro, main prize at the 1989 Venice International Film Festival. His movies make highly recommanded viewing for anyone interested in Taiwanese culture and history.

Whether he deals with personal or historical topics, Hou uses a deliberately minimalist approach, with frequent ellipses and scenes shot in single long takes with minimal camera movement. He also tends to eschew linear narration, and to use wide compositions that display characters coming and going in a given setting.

Actress Shu Qi has acted in at least three of his films: Millennium Mambo, Three Times and The Assassin.