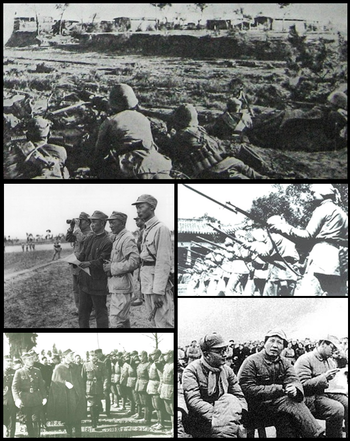 The Chinese Civil War of 1927-50 was fought between a number of factions for control of the Republic of China (est.1912). The most powerful of these were initially Marshall Zhang Zuolin of Manchuria, General Secretary Chen Duxiu of the CCP (Communist Party), Minister Wang Jingwei of the Reformed KMT (Nationalist Party) left-faction, and Generalissimo Chiang Kai-shek of the KMT centre-right faction. The last remaining great warlords in the war's final phase of 1946-50 were General Secretary Mao Zedong of the CCP, General Li Zongren of Guangxi, and Chiang.

The war is generally considered to have begun in 1927, when Chiang Kai-shek led the Socialist-Nationalist two thirds of the KMT's military forces against Wang Jingwei's Socialist-Communist/Internationalist third. This was the first time in the Republic's history that two organisations with sufficient bases of popular support and military-economic power to potentially unify the country had fought one another. Despite controlling Beijing and claiming the Presidency of the Republic, Marshall Zhang Zuolin of Manchuria is generally considered not to have had the support of the people or sufficient organisational cohesion/efficiency to have posed a credible alternative, which is why the KMT's internal struggle is considered the start of the war.

Once the KMT was unified under Chiang Kaishek that year, the next decade involved further fighting between the unified KMT and innumerable minor warlords and rebellions, Zhang Zuolin (1927-8), Li Zongren's Guangxi Clique (1931), Wu Peifu of Jiangxi (1931), the KMT's own rebellious 19th Route Army of Fujian (1933-4), and the various factions of the disunited CCP (1931-4). By mid-1937 Chiang's regime controlled the Yangzi provinces and North China Plain, and so had effective control over about a third of the Chinese population... and his remaining rivals, Li Zongren and the new CCP leader Chairman Mao Zedong, had control of less than a twentieth each. Their doom was, historians agree, imminent and inevitable.

The Japanese invasion not only bought Li and Mao breathing space, but the demands of fighting the war essentially destroyed the KMT's capacity to function as an administration. The invasion directly caused gross corruption and demoralisation among KMT personel, and delegitimize it in the eyes of many ordinary Chinese people.

The Japanese invasion of July 1937 more than doubled KMT expenses and cut KMT income by two-thirds in the first month, due to the full economic mobilisation and Japanese naval blockade which virtually eliminated tariffs (taxes on imported goods). The KMT felt unable to raise direct taxes on land/the harvest to levels which would cause food shortage or famine, so after the first year income stabilised at less than half of expenses. As revenue collapsed further as more provinces were occupied and taxes had to be lowered to prevent artificially-induced famine, the KMT tried to fire soldiers in 1938. When this created hundreds of thousands of (heavily armed) bandits overnight, they realised their mistake and rehired them as "soldiers" assigned to subsistence farming duties. A rapid increase in the production of 'book' ('quantitative easing') and 'paper' (literal printing of cash) money combined with deficit spending and foreign loans from the Soviet Union (1937-1939) and USA (1941-45) to create exponentially increasing inflation.

Inflation caused widespread corruption among KMT personnel out of necessity by 1943-4, when the KMT administration's ability to track monthly inflation and increase wages to match it finally broke down. In many months, government wages inadvertently became inadequate to survive on for many ordinary personnel with families, and even some singles. High direct taxation led to widespread food shortages and worsened a famine in Henan province which killed 2 million and rendered the province ungovernable. The desperation of cash-strapped regional governments led to them adopting a CCP policy, namely encouraging the cultivation of Opium for export to Japanese-controlled areas. Some regional governments even established Opium monopolies and encouraged consumption within their own jurisdictions.

The final blow was struck by the Japanese Army's semi-successful April-December 1944 Ichi-Go offensive, which was launched to capture the airbases that the US Army was using to harass Japanese shipping. The offensive collapsed the KMT tax base and caused widespread demoralisation, raising inflation and corruption to level which became completely unmanageable. Some economic historians contend that the offensive ended the KMT's capacity to maintain medium-term (5-20 years) internal cohesion, even in the absence of external pressures.

The USA's Truman Administration seems to have believed that the KMT and CCP were like the Democratic and Republican Parties of the USA itself: that they had come to blows through an unfortunate series of misunderstandings and that, if only an older and wiser outside power could force them to sit down and negotiate with one another, they would realise that their differences weren't so great after all and that war with their fellow countrymen was a terrible thing which neither side truly wanted. To this end, they dispatched the Marshall Mission of 1945-6, which used the threat of withholding UNRRA (United Nations Relief and Rehabilitation Administration) funding and sales of US-calibre munitions to force the KMT to negotiate with the CCP about disarming, resolving their differences, and forming a unified government together. The US also destroyed all German-calibre weapons and munitions captured in the European theatre of war to increase their influence over the KMT through arms sales.

If any of its premises had been correct then it might have worked. But none of them were, and it was one of the stupidest American Foreign Policy decisions ever made. It failed utterly, to the complete lack of surprise of everyone who actually knew anything about Chinese politics.

Stalin and the Truman administration realised that they had severely underestimated the fragility of the KMT regime when, after Stalin gave some tacit support to the CCP and the USA suspended aid funding and arms sales in 1946-7, the CCP began winning victories against KMT-allied and KMT troops in Manchuria and Inner Mongolia. Both powers had believed that their tacit support for the KMT's enemies would weaken the regime and therefore make it more willing to agree to unequal trade and arms deals, but neither had anticipated that the KMT could lose or had hoped that this would be the case. This was because a CCP-run China could not be easily influenced into favouring US corporations, nor the existing Sino-Soviet joint venture enterprises in Manchuria and Xinjiang established by the 1945 Treaty of Sino-Soviet Friendship (between the KMT and USSR). Moreover both would find it much harder to influence CCP-China to vote in their interest on the UN Security Council, since neither bribery nor coercion would be as effective against a less corrupt and stronger regime.

The USA and USSR resigned themselves to a much more protracted CCP-KMT struggle than they had anticipated in different ways. The Truman administration suspended all aid money, though they resumed arms sales in 1947. Stalin authorised the dispatch of 100,000 North Korean volunteers to fight with the CCP, and a growing Soviet technical and military advisor presence. Both grew increasingly unhappy with the course of the war as the balance of power tipped in favour of the CCP and Li Zongren ousted Chiang Kaishek to assume the Presidency of the Republic, dividing the KMT's house against itself. After the CCP broke the 'back' of the KMT in the third (of three) encirclement campaigns in the Beijing area in the winter of 1948-9, Stalin attempted to force the KMT and CCP into agreeing upon a 'Two State' solution (one 'Northern' CCP-China, one 'Southern' KMT-China). Chiang agreed. Mao refused.

In April 1949 the CCP shattered the KMT's last cohesive defense line on the Yangzi river, after which KMT resistance was too weak and disparate for the conclusion to be in doubt. Even after the CCP's declaration of the People's Republic of China on the 1st of October 1949, fighting continued in the Himalayan foothills and mountains, Tibetan Plain, Chinese Central Asia, and on Hainan Island into 1950. In some areas the fighting overlapped with the beginning of The Korean War, which Stalin allowed President Kim Il-Sung to launch in part because he wanted to prevent the CCP from taking the KMT's last major hold-out on Taiwan Island.

It worked: the Republic of China continues to exist on Taiwan, and technically the Chinese Civil War is still ongoing... and remains a major cause of Sino-American tensions to this day.

For a more detailed account, visit The Other Wiki here: http://en.wikipedia.org/wiki/Chinese_Civil_War