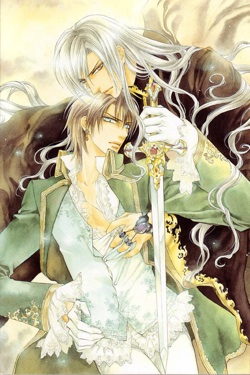 Prince Vald of the kingdom of Alsvieth must take up a legendary sword in order to defend his people, but the sword is cursed: having taken it up and used it, Vald now transforms into a demon every night if he is not magically restrained. He goes on a journey to find a magician who can break the curse, and meets Halvir Hroptr, a powerful but arrogant mage who agrees to break the curse if Vald escorts him on his travels. So far, so boilerplate Heroic Fantasy, but on Vald's first night with Halvir, Halvir succumbs to curiosity and breaks the magical shackles restraining Vald's curse — and decides that having sex with Vald in his demon form will both restrain the demon and feed his own magical power. The next morning, Vald wakes up refreshed, but with no memory of what happened the night before... except for some reason he can't stop staring at Halvir's mouth...

And so their journeys continue, with Vald and Halvir acquiring companions and developing a strange bond as they travel through various fantasylands and encounter demons, dragons, and quarrelsome magicians. Depending on where you're coming from, Crimson Spell is either a fantasy with lots of gay sex scenes or a Boys' Love series with an unusually well-developed plot and setting; it's a genre hybrid that works better than most because it gives equal time to both elements.

In 2021, Crimson Spell concluded its run with eight volumes collected. It's licensed in English by Media Blasters' Kitty Media subsidiary. Tokyopop Germany is releasing it in German.

Now has a characters page under construction.