Moments subpages are Spoilers Off. You Have Been Warned! 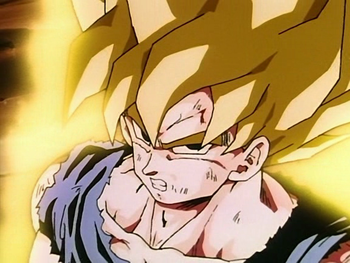 "I'm the Saiyan who came all the way from Earth for the sole purpose of beating you. I am the warrior you've heard of in legends, pure of heart, and awakened by fury. That's what I am. I AM THE SUPER SAIYAN, SON GOKU!!!"
Dragon Ball has many awesome moments per character, but putting down the crowning ones is a tough job to do.
Advertisement: