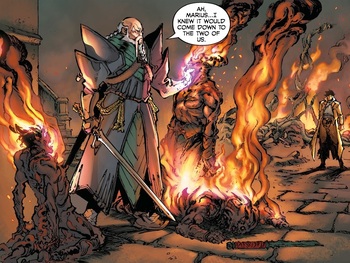 "We have won, and the Qunari outside will soon feel our wrath. As will the whole world."
Justice: Foul sorceress! You will release these poor folk and submit yourself to justice!
Baroness: Justice? Is that what you are calling it? What of their punishment, burning my home to the ground and me within it?
Villager: Because you were stealing our children! Using their blood to feed your vanity!
Baroness: As was my due! You lived on my land, I your rightful ruler! Your blood was mine just as your lives are now!
—Awakening
Advertisement:

Thedas is a dark place, where vile sorcery, slavery, and mass murder occur regularly. Darkspawn, demons, and evil spirits do everything they can to make the lives of mortals miserable, to say nothing of what mortal races do to each other. Despite all that, these few individuals manage to prove themselves as the cruelest beings in the world, they live in.

Other Media (by release/publication date)