The empire of Frieza is also known as the Frieza Force, Galactic Frieza Army or Planet Trade Organization and formerly known as the Cold Force or Cold Army. It is the second major army introduced in Dragon Ball. At their peak, they controlled close to 70% of the known universe and were widely feared thanks to their boss, Frieza.

That all changed after they went to Planet Namek looking for the Dragon Balls to make Frieza immortal. All of Frieza's top generals, including the Ginyu Force, were wiped out by Vegeta with some help from Goku. Frieza himself was defeated and gravely wounded from his battle with the Super Saiyan and only survived because King Cold found him in the rubble of Namek. Once Frieza was rebuilt as a cyborg, he took his father and his forces to Earth to get revenge on Goku. There, they were killed by Future Trunks.

Almost two decades after Frieza's death, the Frieza Force is a shadow of their former selves and are on their last legs. In a desperate bid to save The Empire, Sorbet goes to Earth to revive Frieza using the Dragon Balls. Instead of rebuilding his failing empire, Frieza chooses, once again, to get revenge on Goku and Future Trunks. This ends with the last of the Frieza Force being wiped out on Earth and Frieza being killed again, officially ending the reign of Frieza's empire.

At least, until roughly two years later; as a reward for genuinely helping save the universe in the Tournament of Power, Frieza is revived once more by Whis. Unlike his last revival, Frieza this time around has the clarity of mind to focus on rebuilding his empire, of which at this point only vestiges remain. 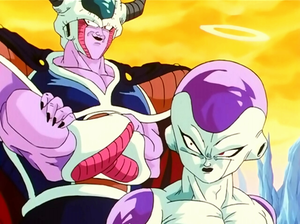 The race Frieza belongs to. Unlike most species in the series, very little is known about them and they don't even have an official name; they're only ever referred to in supplemental material as "Frieza's Race." Most of what we know about them come from interviews with Toriyama, material outside of the main Dragon Ball story, and bits of dialog stated by Frieza, King Cold, and Frost.

See Frost's page for any information on Frost, Frieza's counterpart in Universe 6. 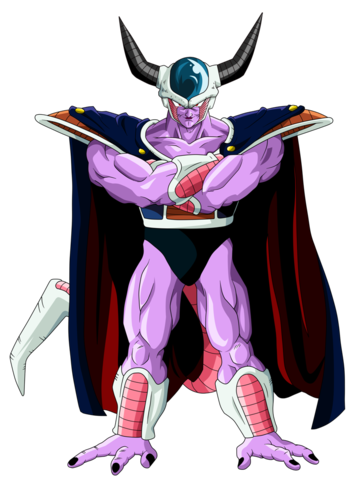 The former ruler of the Frieza Force. (Known during his rule as the Cold Force) Cold keeps his own existence a secret and lets his son(s) run the empire's affairs in public. After Frieza is almost killed by Goku, King Cold retrieves his body and has him rebuilt as a cyborg. The two of them then head for Earth to take revenge on the people who did this to Frieza... where Cold and his son are both effortlessly killed by Future Trunks. Unlike his son, he stays dead in Dragon Ball Z: Resurrection ‘F’ (Sorbet considers reviving him in Dragon Ball Super, but is foiled by the Pilaf Gang). He makes a cameo in the Broly movie, wherein he introduces his son Frieza to the Saiyans and retires from commanding the Cold Army, leaving Frieza in command as the group is renamed Frieza Army. 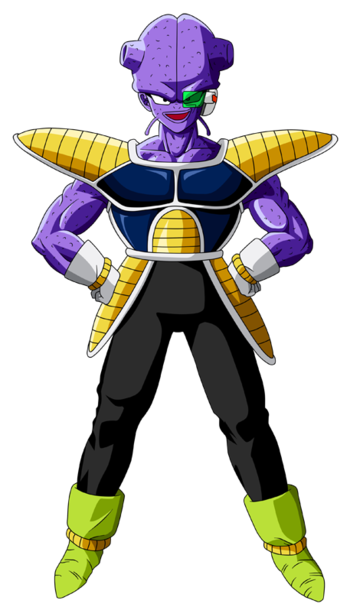 An elite soldier in Frieza's army who has a 'rivalry' with Vegeta. He is easily killed by Vegeta upon his arrival on Namek, showing how much more powerful Vegeta has become since his battle on Earth. 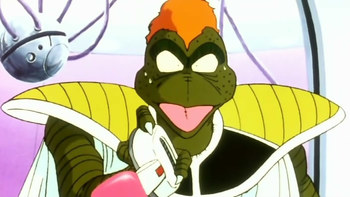 A bird-like alien who serves the Frieza forces as a medic on Planet Frieza 79. Notable for tending to Vegeta after his defeat on planet Earth. 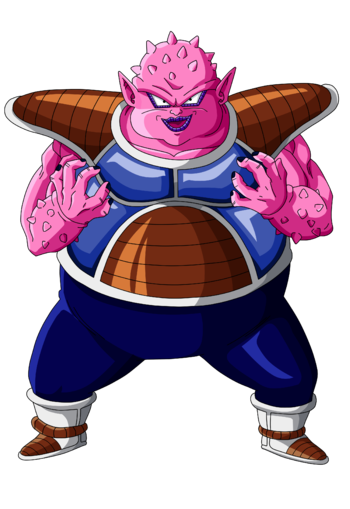 Dodoria is one of Frieza's Co-Dragons who are the highest-ranking Generals in Frieza's military by the chain of command. Both Zarbon and Dodoria serve to show how powerful Saiyans become after recovering from a near-death experience. Dodoria, who was stronger than Vegeta before Vegeta's defeat on Earth, is killed with ease but reveals the truth behind the destruction of the Saiyan homeworld. 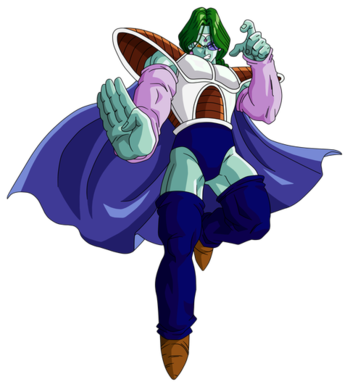 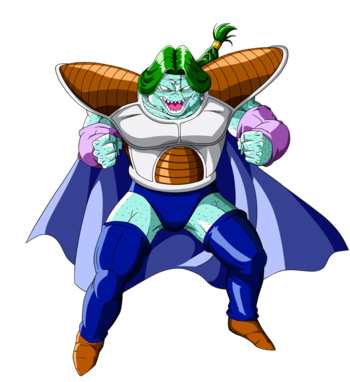 The other of Frieza's Co-Dragons, the highest-ranking Generals in Frieza's military by the chain of command. Like Dodoria, Zarbon serves to show how powerful Saiyans become after recovering from a near-death-experience. Zarbon beats Vegeta nearly to death in his monstrous second form, only for Vegeta to later recover and kill Zarbon instead. 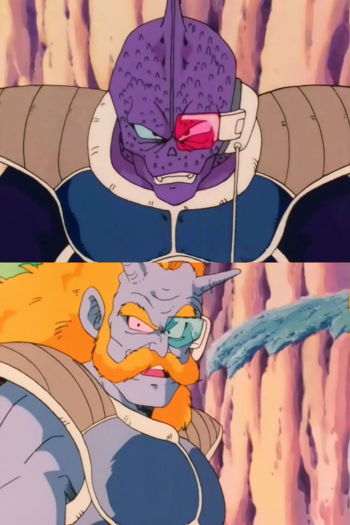 Two Frieza mooks sent by Zarbon to investigate two noticeable power levels in the area, which turn out to be Krillin's and Gohan's. Discovering them alongside Bulma, they are quickly defeated by Krillin and Gohan; Sui with a single punch from Gohan, and Banan when Krillin kicks him in the face. 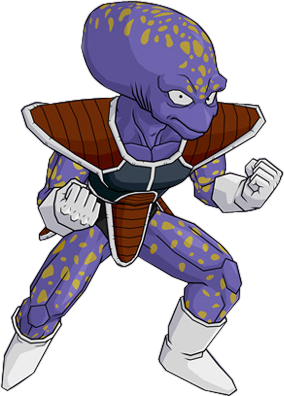 One of Frieza's mooks. In the manga, he's the only surviving henchman besides Zarbon and Dodoria after the onslaught on Dende's village. Killed by Vegeta after he recovers from his fight with Zarbon. 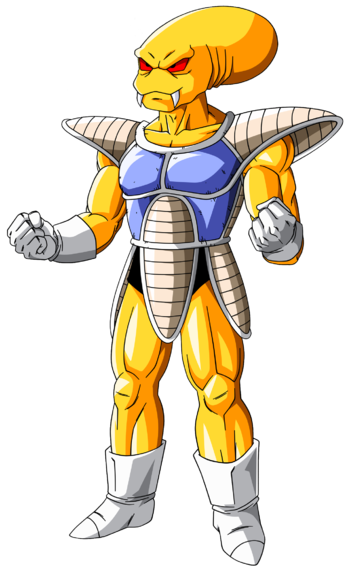 One of Frieza's mooks, who discovers the Namekian village that Vegeta had slaughtered for its Dragon Ball. He interrogates the only survivor, and learns that it was Vegeta's doing. He then kills the Namekian and returns to Frieza's ship to report, where he angers Frieza by letting slip that he killed the survivor without first asking where Vegeta may have hidden the Dragon Ball. Frieza kills Orlen without a second thought. 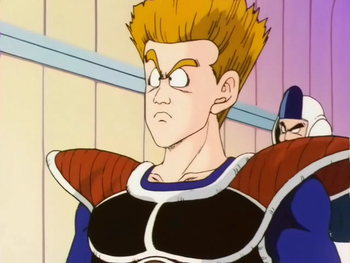 One of Frieza's mooks who was callously killed by the dictator.

One of Frieza's mooks who holds Bulma hostage, but is tricked by her into fighting a giant Namekian crab. 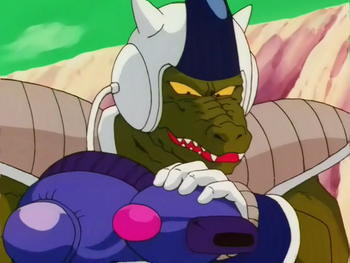 Voiced by: Masaharu Satō (Japanese)
Voiced by: Doug Parker (Ocean dub)
Voiced by: Kyle Hebert (Z ep. 59 only), Markus Lloyd (Z ep. 60 only) (Funimation dub)
Voiced by: José Luis McConnell (Latin American)
"You got two choices! You can come with us, or I can kill you here!"

One of Frieza's mooks who holds Bulma hostage, but is tricked by her into fighting a giant Namekian crab. 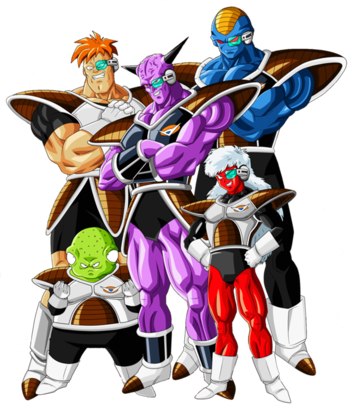 Mercenaries summoned by Frieza after Zarbon and Dodoria are killed. Their strength is second only to his. Basically just obstacles to get in the Z Fighters' way while everyone was looking for the Dragon Balls on Namek. With Ginyu's unique power, he switched bodies with Goku, horribly injuring his own before the switch. When Ginyu is almost beaten by Vegeta, he attempts to take Vegeta's body. Goku first blocks Ginyu's path and regains his body and then throws a frog in Ginyu's path when he tries again. Ginyu is stuck as a frog, who couldn't talk or switch bodies. The rest of the Ginyu Force is killed by Vegeta, but only after most of them are distracted or already defeated and knocked unconscious by Goku. 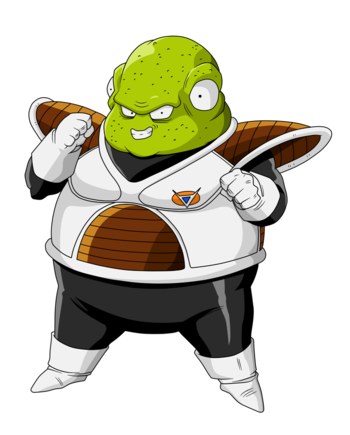 The smallest and least physically powerful member of the Ginyu Force. Guldo possesses some psychic abilities, including being able to stop time for as long as he can hold his breath; this seems to be the primary reason he has attained membership in the Ginyu Force. 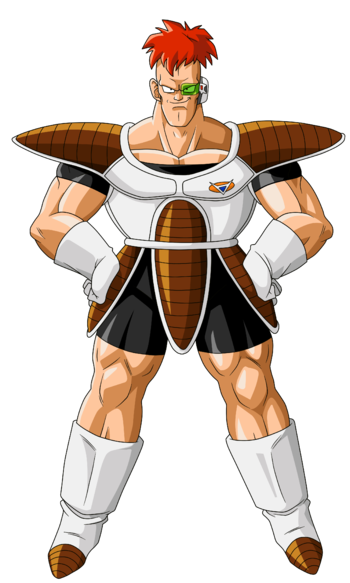 Voiced by: Kenji Utsumi (Z), Seiji Sasaki (Kai) (Japanese)
Voiced by: David Kaye (Ocean dub), Christopher Sabat (Funimation dub) (English)
Voiced by: Mario Sauret (Z), Salvador Reyes (Kai) (Latin American Spanish)
"My name is Recoome, it rhymes with doom, and you'll be hurting all too soon. I really am a man of many many talents."

The most flamboyant member of the Ginyu Force, seen striking poses more often in battle than Captain Ginyu himself, and generally behaving in a deceptively goofy manner. That being said, he's still a large, muscular being who gives the heroes a hard time. 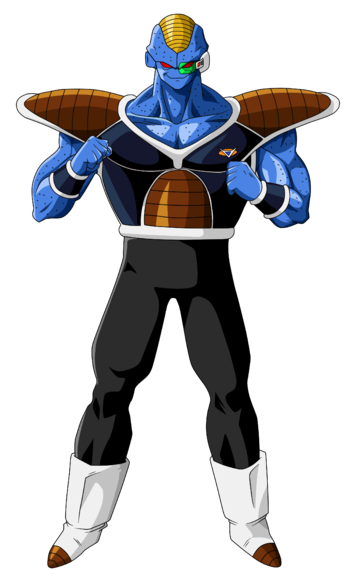 The biggest and fastest member of the Ginyu Force, he often performs Combination Attacks with Jeice. 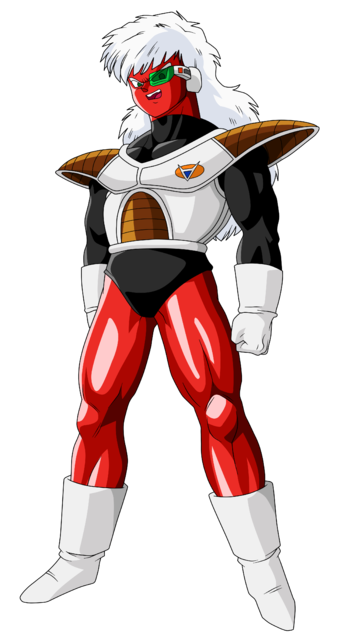 Ginyu's second in command and partner of Burter, often pairing with the latter for Combination Attacks. 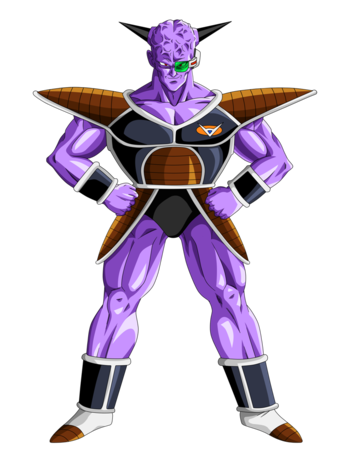 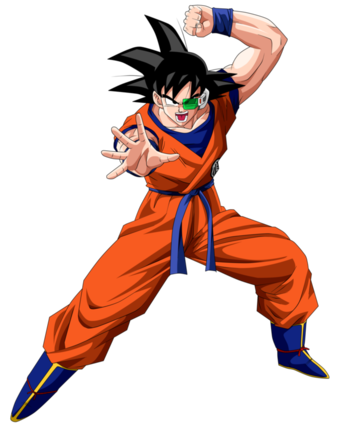 Voiced by: Hideyuki Hori (Z), Katsuyuki Konishi (Kai) (Japanese)
Voiced by: Richard Newman (Ocean dub), Dale Kelly, Brice Armstrong (Z), R. Bruce Elliot (Kai) (Funimation dub) (English)
Voiced by: César Soto (Z and Super), Octavio Rojas (Kai) (Latin American Spanish)
"The purpose of striking a pose is not to become like a wallpaper. That's why we chant loudly when we pose, to draw attention to our magnificence. I know. I'll just have to raise the stakes a little bit. The best poser gets a candy!"

The captain of the Ginyu Force. His strength is second only to Frieza and he has the ability to exchange bodies with anyone by using his Body Change technique. 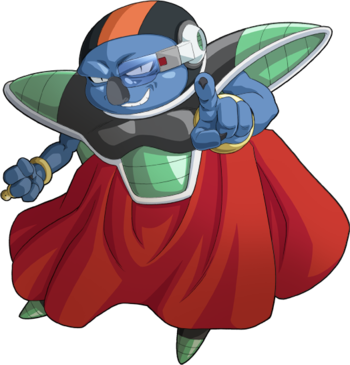 The leader of the Planet Trade Organization following the deaths of Frieza and King Cold at the hands of Future Trunks. Unable to hold the organization together, he gets the idea to use the Dragon Balls to resurrect their former boss in Dragon Ball Z: Resurrection ‘F’.

Sorbet's lieutenant. He is killed within the first minutes of the movie, however, his role was expanded in the Dragon Ball Super adaptation of the movie. 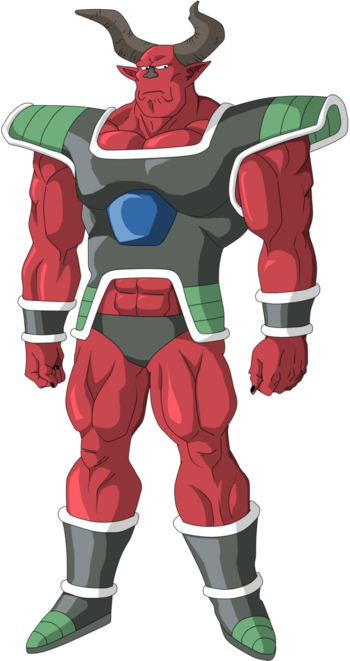 A member of Frieza's forces who took Dodoria's place as The Brute during Frieza's invasion of Earth.

A delinquent that stole a spaceship from the Galactic Patrol, and then joined the Frieza Force to avoid them.

A member of the Frieza force. Has been working in the empire for decades. 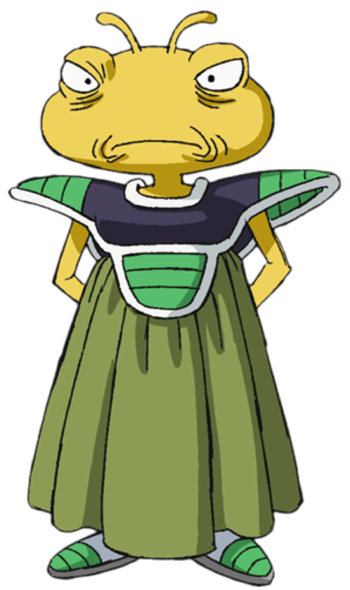 A member of the Frieza force. A brilliant scientist who has been with the empire since the days of King Cold, he was responsible for adapting the Tuffle technology for the empire. 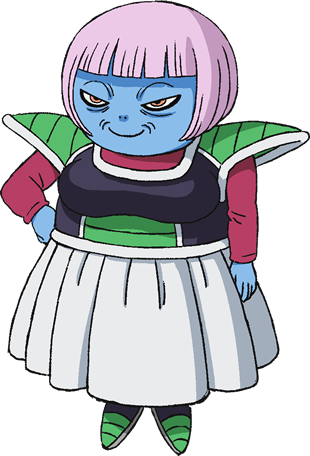 Frieza's servant since childhood, and implied to be his nanny.

Characters from other materials 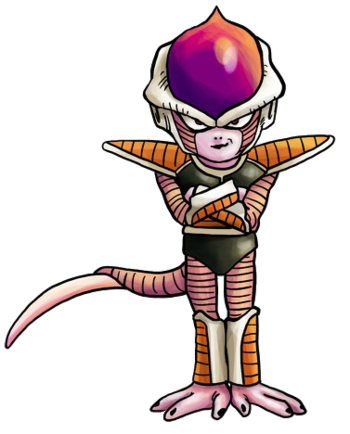 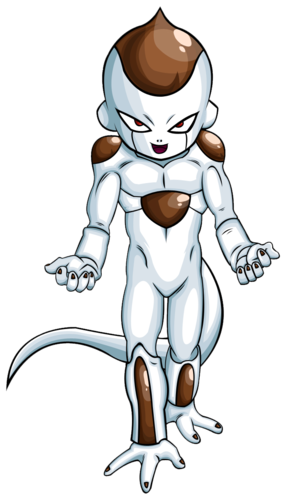 Frieza's son who appeared in Nekomajin, a Dragon Ball parody manga by Akira Toriyama. He has gone on to make minor appearances in a few video games, most notably Dragon Ball Heroes.
Bonyu 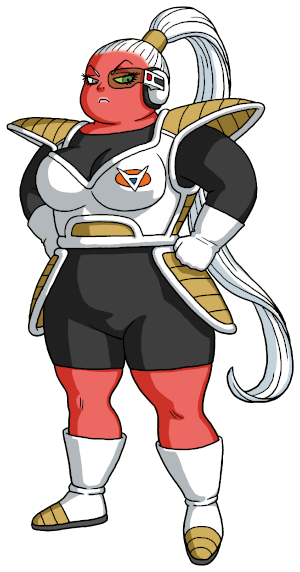 A former member of the Ginyu Force who left the group due to finding their poses embarrassing. Bonyu is a member of Jeice's race, and debuts in Dragon Ball Z: Kakarot