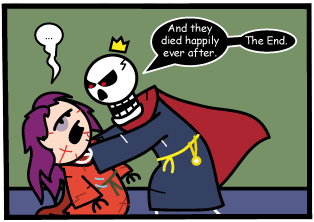 "[Xykon] seems funny and charming, but believe me, when you see for yourself the depths to which he'll sink—you will never sleep well again."
"I ripped off my own living flesh so that I wouldn't have to admit weakness. You're strictly little league compared to that. That right there? That's the difference between bonafide true Evil with a capital "E" and your whiny "evil, but for a good cause," crap. One gets to be the butch, and one gets to be the bitch—bitch."
— Xykon, to Redcloak, The Order of the Stick, Start of Darkness