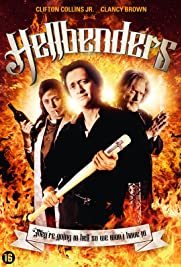 Deliver them to evil

The Augustine Interfaith Order of Hellbound Saints is a demon hunter organization with... Unorthodox methods. You see, they live a life of constant sin, breaking every part of their vows they can, in the hopes of attracting demons to them so they can be sent back to Hell where they belong. One day, they learn a rabbi accidentally awakened an Ancient Evil out to destroy the world. Now, the Hellbound Saints must prevent Hell on Earth.

The film was distributed on DVD by Lionsgate. It's not to be confused with Hellbinders.