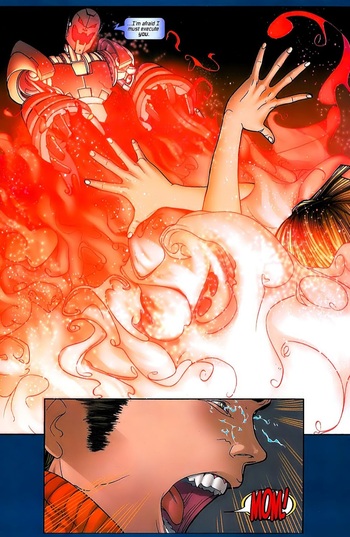 "Don't shed a tear for your birth creature, my darling simulacrum. Your mother was a degenerate criminal, nothing more than raw genetic stock for your glorious technological future!"
"Before all was, I was. Before time was, I waited. I fed on the screaming souls of the universes. I drank the spoiled milk of dead stars. I am the emptiness outside all understanding. I am Shuma-Gorath."
— Shuma-Gorath, Mighty Avengers (Vol. 2 issue #2)
Advertisement:

Other comics under Marvel or related imprints (such as Icon Comics) can be found either at Comic Books or at the appropriate franchise's subpage (G.I. Joe; RoboCop; Transformers, etc.)

Vol. 1
Vol. 2
Others, by publication date