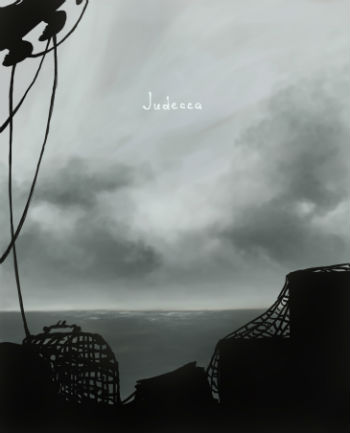 We passed beyond where icy waters enswathed others
"An island of grey floating in an icy sea. Ships come, and people come, but nobody leaves. Their eyes change first."
Advertisement:

", a webcomic by Jonathan Meecham and Noora Heikkilä

, takes place on an island in a river in Hell, and follows the lonely souls who dwell there.

Sharky, who gets his name from looking like a shark, and his roommate Fredrick Dickenson (a rabbit and former banker) find themselves with an uninvited guest: a young girl with a Glasgow smile. In Hell any little thing that breaks up the monotony is a gift, but as Sharky and the young woman's friendship grows, this ripple might threaten to stir up worse muck then they could imagine.

Discontinued as of March 2016.