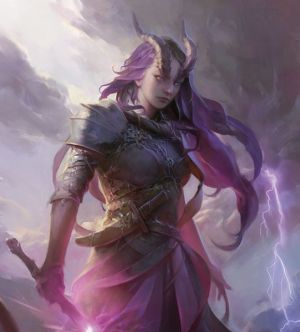 Farideh met the devil in the dead of winter, seventeen years after she'd been left at the gates of a village on no one's map...
Advertisement:

The Brimstone Angels Saga is a six-novel Heroic Fantasy series by Erin M. Evans, set in the Forgotten Realms.

Farideh and her twin sister Havilar are tieflings—humanoids with devilish features and ancestry. Abandoned as infants, they were raised by their dragonborn foster father Clanless Mehen in an isolated village in the south of Faerun- until a botched ritual summoning lead to Farideh making a pact with the Cambion devil Lorcan that got them kicked out, but also granted her the magical powers of a warlock.

Fast-forward several months, and the three find themselves working as bounty hunters and heading for the devastated city of Neverwinter, while Farideh learns to master her powers and tries to deal with Lorcan's attempts to micromanage her life. Along the way they find themselves entangled with the Selunite priest Tam Zawad and a young man from Cormyr named Brin, both of whom have their own secrets. Upon arriving in Neverwinter, however, they become caught up in an elaborate web of treachery that may stretch all the way to the depths of the Nine Hells...

The series consists of the following volumes :