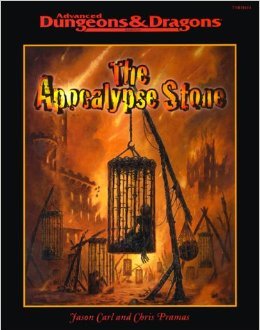 The Apocalypse Stone is an Advanced Dungeons & Dragons adventure module published by Wizards of the Coast and credited to Jason Carl and Chris Pramas as authors. It's designed to give an epic adventure for high-level characters that will end with the destruction of the game world. It came out shortly before the Third Edition, as a way to "clear things out" and start fresh with the new system.

When the gods created the world, its seed was the stone known as The Stone of Corbinet. Once the world was complete, they sought a worthy champion to guard the Stone, and settled on a man named Pescheour, whose family has guarded it in their castle ever since. Now, however, an evil prince of the family, Garloth, has sworn revenge after being denied kingship. Not knowing the Stone's true importance, he plans to steal it. To this end, he feeds the player characters false information about a test of heroes. Once they have retrieved the Stone, Garloth retires with it in his own castle, not knowing that its removal from its proper place is cutting the world off from other planes of existence and will eventually cause its destruction. After the heroes find this terrible truth, they are sent on a last final mission to set things right again.

The Apocalypse Stone provides examples of: