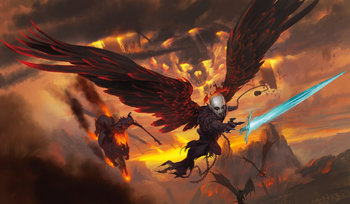 Forge your fate in hellfire!
Advertisement:

The adventure begins in Baldur's Gate, where adventurers are being drafted by the Flaming Fist to help them defend the city, which is in the midst of a refugee crisis following the "disappearance" of the neighboring city of Elturel. But soon after, they become involved in a treacherous quest that takes them to Avernus, the first layer of the Nine Hells of Baator and the main battleground of the Blood War between devils (led by the archdevil Zariel) and demons (led by various demon lords), along with some yugoloths, local warlords, and a certain evil dragon goddess caught in between. With the fates of Elturel and Baldur's Gate at stake, adventurers must navigate through the infernal landscape with the help of infernal war machines, and deal with the various denizens of Avernus who will either help them in their quest or prevent them from returning home... including those with tempting offers that the adventurers can bargain for.

DISCLAIMER: This adventure is a work of fiction aimed at providing you and your friends with many hours of fantastic entertainment. Although devils and the Nine Hells play prominent roles in this story, the evil they represent is meant to be fought and overcome. Wizards of the Coast fully endorses the kicking of evil's butt. Let darkness fall and light prevail! We strongly advise that you do not play this adventure backwards, lest Asmodeus appear in a puff of smoke to talk politics, as archfiends are wont to do.