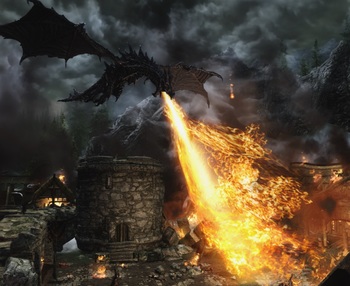 "And the Scrolls have foretold, of black wings in the cold, That when brothers wage war come unfurled! Alduin, Bane of Kings, ancient shadow unbound, With a hunger to swallow the world!"
"Indiscriminate death. Set upon by the gnawing and the rabid. Cyrodiil's candle flickers and is snuffed. Servants and superiors — no one is spared the sharp tooth, ridged blade, or diseased hook, barb, or beak. And Molag Bal will watch from his palace in Coldharbour where everything stares back at him with his own face, and he will gloat, and mock, and gorge on the souls of mortals."
—Flaccus Terentius, dreaming of Molag Bal's invasion, The Improved Emperor's Guide to Tamriel ("Dreams of Cyrodiil

Live another life, in another world. Just watch out for these villains, who aim to make that world a living hell.