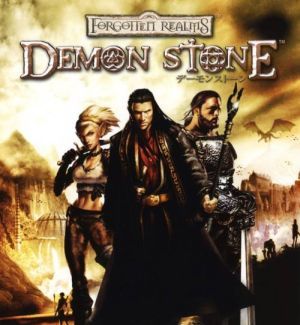 Demon Stone is a hack-and-slash style video game set in the Forgotten Realms universe. Its story was written by R.A. Salvatore (of The Legend of Drizzt fame) and features the voices of Patrick Stewart and Michael Clarke Duncan. It is based on the same game engine that was used to make Lord of the Rings: The Two Towers.
Advertisement:

The story tells of how Ygorl the Slaad-Lord and Githyanki general Cireka began a war with each other a century ago to determine who would get to invade and conquer Faerûn, only to have their spirits sealed away in a magical gem called a Demon Stone by the legendary wizard, Khelben Blackstaff. However, Ygorl was able to psychically reach out to three adventurers and trick them into setting him (and by extension, Cireka) free. Now, human fighter Rannek, human wizard Illius and half drow/wood-elf rogue Zhai must seek out a way to stop these two from tearing Faerûn apart.