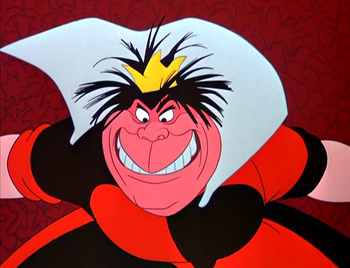 "Off with Her Head!"
Dwarfs: The Queen!
Bashful: She's wicked!
Happy: She's bad!
Sneezy: She's mighty mean!
Grumpy: She's an old witch! And I'm warnin' ya, if that queen finds [Snow White] here, she'll swoop down and wreak her vengeance on us!
— Snow White and the Seven Dwarfs
Advertisement:

The Good Kingdom: A lovely, wealthy country ruled by a benevolent king, a wise prince, and a fair princess, all loved by the populace. But what's that? There's a queen? Oh, brother, we're in trouble.

While kings and princes can be good or evil, and nice or mean, and princesses are (almost) always good, queens tend to be the royalty version of Always Chaotic Evil. Restrained by a competent king (or in a setting where the queen's only role is to produce an heir to the throne), this usually doesn't show, but once a queen is in charge, things get nasty. Either the king is missing or has died in an accident — the queen might have helped things along herself — or he's easily manipulated for some reason. Note that there are good queens in fiction, but they normally don't stay around for very long, or at all. And this trope comes into play whether they are ruling in their own right or as regents for the under-age king. (The latter group tends to fall under My Beloved Smother, as well.)

Averted pretty much every time the lovely princess becomes queen mid or end-story, or when the queen was a princess in a prequel to the story, and when the princess rules the kingdom much like a queen would, and is only princess in title. Good queens don't need to be listed: they are simply The High Queen. However, it is not uncommon for a work to contrast a lovely heroic princess with one of these — see Good Princess, Evil Queen.

There is a notable difference in how queens are portrayed depending on how they came to be queen. Queens who became queen because their late father the king had no sons (or had evil, ambitious sons) are usually exempt from this trope, by virtue of being the "rightful heir". Her sexist adversaries may view her like this, but the narration will usually be on her side, in the style of You Go, Girl!. Meanwhile, queens who become queens by marrying kings and/or getting their sons on the throne are very likely to fall under this trope. Why? Because Ambition Is Evil. Also, she likely became queen by marrying a king as a Hot Consort, and seductresses are evil — and she is probably suspected of being a Lady Macbeth.

In all of their incarnations, the evil queens' motivation for coveting power is almost always the same: they want to relish power for its own sake. Such characters usually don't have any actual political/economic projects for their people, nor do they wish to bring order or try out a policy on a large scale. In the most Anvilicious cases, their ultimate goal is to ruthlessly tyrannize men and to subjugate other women, being often especially malevolent towards women who are prettier than themselves. The odd female Villain Sue often turns out this way.

In fiction, an evil queen may occasionally be also an evil sorceress or a Wicked Witch. The ability to do magic would easily explain why she is able to take power (and most importantly, keep it) in the male-dominated society that is most classical settings ruled by monarchs. Especially if she, being a woman, has no military or warrior abilities of her own.

Queen Elizabeth II is portrayed as a card-carryingly evil bitch that associates with the likes of Bryce Tankthrust and will often lord her power over others with the threat of death.

Queen Elizabeth II is portrayed as a card-carryingly evil bitch that associates with the likes of Bryce Tankthrust and will often lord her power over others with the threat of death.