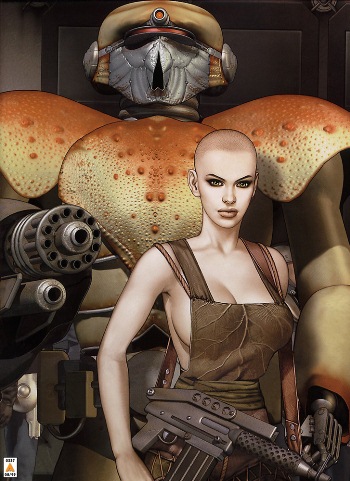 The cover of the first volume, featuring Adamâ and a Megalex Shock Trooper
Advertisement:

A soft science-fiction graphic novel written by Alejandro Jodorowsky and illustrated by Fred Beltran. The book is published by French publisher Humanoids, set in the same universe as Jodorowsky's other science fiction comics, The Metabarons and The Incal. Megalex is a City Planet ruled by a royal family and an elite noble class. The common people are kept addicted to drugs and kept in line by police clones programmed to be loyal to the ruling class and implanted with control tabs that will kill them after four hundred days of life. The common folk can only live to forty, while the ruling class can hope for at least four hundred years, and the actual royal family will live for over four thousand.

The entire surface of the planet except for the oceans and a small area of forest (known as the Chem Forest) is covered in urban sprawl with absolutely no organic matter. But beneath the city, the tunnel-like ruins of the old city lead to a series of massive, unfathomed caverns seven thousand feet below the surface, teeming with underground life. The rebels live in the caverns, occasionally venturing to the surface to raid the city.

The first protagonist we are introduced to is an anomalous police clone who is almost twice the size of the rest of his brethren, spared customary termination by an alien attack on the city that drew the cloning factory overseers away from their duties. He is rescued from the surface by the lovely freedom fighter Adamâ, and brought down to the subterranean world. There, he meets a resistance leader named Zerain. Zerain is a mutant with a hunchback who also seems to be destined to lead an open rebellion on the surface. He also seems to be in love with the main antagonist, the princess Kavatah. Kavatah herself is a beautiful woman who hates everything about the Chem Forest and the underground rebels.