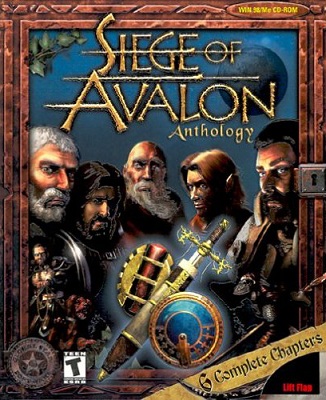 Siege of Avalon was a Western RPG released in 2000, and was also the first and only game developed by the Houston-based studio Digital Tome. It was published by Global Star Software, a subsidiary of Take-Two Interactive which later became 2K Play.

The backdrop of the game is a massive war. The nomadic Sha'Ahoul from the east have been slowly forcing back the defenders of the Seven Kingdoms of Eurale, and the defenders have retreated to their last bastion: the citadel of Avalon. As the game begins, you have just arrived in Avalon looking for your war hero brother, Corvus, in order to inform him that your father has died and that he is now a lord. After doing so, you join in the defense of the castle. Everything goes downhill from there. War, intrigue, political maneuvering, treason, and the slaughter of countless mooks later, the siege of the castle is finally broken... by the attacking Sha'Ahoul horde breaching the defenses, leading to a showdown between you and the Big Bad, Mithras, in the castle courtyard.

Originally, the game was available for download online: the first chapter was free, the remaining five were not. It was later released in an anthology on a CD, which can still be found either online or in some brick-and-mortar stores that don't move their video game inventory very quickly. Based on an original story by R. Van Collinsnote the game's mysterious producer of whom nothing else is known, Siege was envisioned as the first part of a trilogy, to be followed by Pillars of Avalonnote a (somewhat) playable demo of which was released online by the original developers in 2002 and Ashes of Avalon. However, due to its poor sales and to disagreements with the publisher, Digital Tome disbanded soon after its release, leaving the story unfinished. Some of the devs later came back together as Amazing Games, Ltd. to produce an obscure superhero game Hero X for the PC. The original game, meanwhile, was released as open source

note it's at the very top of the page, so you have to close the Wayback Machine control panel to see it about discussing an online re-release of Siege, but deleted the page from his site in late 2017, as the discussions apparently fell through. Meanwhile, some German fans have managed to hack the open source code to implement a HD version

of the game in absence of an official remaster.

In April of 2021, the game was officially re-released on Steam