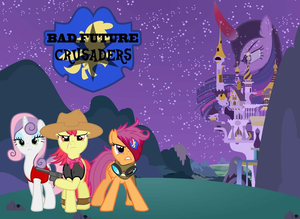 It was a night that changed Equestria forever...
Advertisement:

Bad Future Crusaders is a My Little Pony: Friendship Is Magic fanfic by Tonic Plotter, based on a series of pictures on Deviantart by Astringe that were designed to show the Bad Future trope as distilled through an MLP:FiM setting.

Official summary: "It was a night that will forever be burned into the memories of everypony. One fateful night in Equestria everything changed. The princesses who had ruled over the world with kindness and heart were gone, and a new ruler had taken their place. Years have passed since that event. Ponies have grown up, aged, and moved on with their lives. Equestria has become a very different place over the span of these years. Our story begins when a face resurfaces in Equestria. When a weathered, scarred, but familiar face steps into the light."

. The original series of pictures can be seen here

, and there's also a second set of pictures based on scenes from the story, which can be seen here

. Unfortunately seems to have become a Dead Fic, with the author's last update being from late 2015.