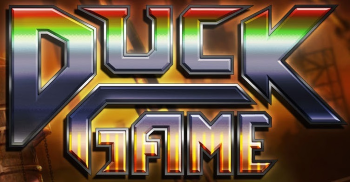 "Enter the futuristic year of 1984, an age where ducks run wild in a frantic battle for glory."
Advertisement:

Duck Game is a 2014 2D platformer shooter fighting game developed by Landon Podbeilski for OUYA, and published on Steam by [adult swim] in 2015. It is built around fast-paced fighting across stages that give little time for everyone to understand what does what, with different levels providing varied challenges, along with many weapons with their own particular quirks.

Alongside the multiplayer mode, there is also a set of single-player challenges that serve as a means of unlocking additional hats and modifiers, as well as allowing you to get used to the finer subtleties of the game, such as sliding to get through tight spaces or break windows, or taking on multiple targets at once.