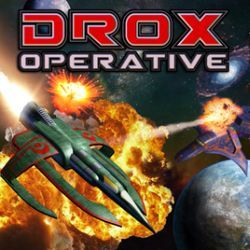 In the far distant future, the known galaxy has been occupied by 13 distinct races, each one determined to outdo the others and become the masters of known space. In the midst of this Space Cold War is a shadowy organization known as the Drox, a coalition of mercenaries that is all that remains of a long dead empire that once spanned the entire cosmos.

You play as one of the many Drox Operatives, and your mission is to ensure that the Drox remains a key figure in the galaxy's history. You can do this in several ways: You can ally yourself with one of the races vying for control of the current sector and help them wipe out the competition, unite the warring nations under the Drox, take control of the sector's economy, intimidate the races with various shows of force and acts of sabotage, or perform great deeds that make the Drox the stuff of legends. Once you have ensured the Drox's hold on the sector, you move on to a new sector. Each sector is randomly generated, and thus a new adventure begins with each new sector.

Much like Din's Curse before it, Drox Operative provides a great deal of customization. There are hundreds of different ship components, including lasers, cannons, power generators, armor, various accessories, and even crew members. As the player moves through the game, they will form alliances, wage war on others, colonize worlds for one or more of the various races, and ultimately leave their mark on the galaxy in the name of the Drox.

An expansion pack, Invasion of the Ancients, was released in November 2013. This expansion added a new monster race, the titular Ancients, to the game. The Ancients were the bitter rivals of the long extinct Drox empire, and for eons the two factions waged war until the Drox seemingly destroyed the Ancients for good. However, pockets of Ancients managed to survive, and now that the Drox empire has been reduced to a "mere" mercenary company, the Ancients have begun their advance on the galaxy, determined to wipe out the Drox, conquer the known races, and become the tyrannical rulers of known space.

The game was released on Steam via Steam Greenlight on Feburary 15, 2014, and the Invasion of the Ancients DLC was released on March 4. A sequel, Drox Operative 2, was released in Early Access in June 1, 2020. The sequel adds several improvements compared to the first game, including racial skill trees and procedurally-generated young races that can cause additional havoc in their galaxies.