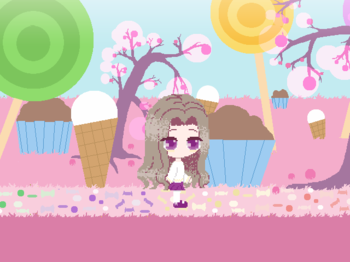 Dream of Gluttony is a horror

game created by UminoAoi, who also made Veins.

You play as Sissy, a normal girl that got lost in the forest. She tries to find her way back home, and so decides to take the one that a mysterious man in the forest had mentioned. She then discovers a town, where people claim to be... food. She pretends to be a passion fruit to gain access, and goes through the town, meeting the quirky inhabitants and playing minigames to help them in whatever they need.

Everything seems to be cute and nice, but... something feels odd here... Maybe visiting this town only once isn't enough to learn the truth?

It can be downloaded both on itch.io

and on Game Jolt

. You can watch the trailer here

Warning: Due to the nature of the game, spoilers are unmarked. You Have Been Warned.

Tropes associated with Dream of Gluttony: