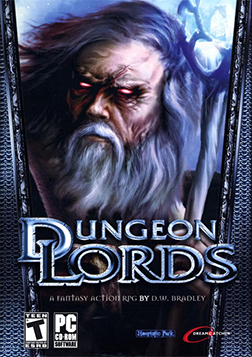 Don't be fooled: in game he looks more like Dumbledore.
Advertisement:

The story of Dungeon Lords is nothing less than a tragedy.

Before Dungeon Lords, there was a quaint little trilogy of dungeon crawlers titled Wizardry. A programmer named David W. Bradley was tapped to design three games in the series (namely, Wizardry V, VI and VII), and he essentially redesigned VI's game engine and story to give them a sci-fi feel.

Several years after Wizardry VII, Bradley formed a game development company named Heuristic Park, who developed two other games: Wizards and Warriors (no relation to Rare's game series ), and... this.

So, when the guy who breathed new life into the Wizardry series put together his own production company to create a brand new "epic Action RPG experience", one would expect nothing but good things. What happened instead was a game so broken and buggy that it sank the reputations of Bradley and his studio, and was described at the time as "a new low for how incomplete a game can be and still get released."

Version 1.0, the first commercial release of Dungeon Lords, was a disaster. Quest items would disappear from the player's inventory at random. The avatar would sink into the ground and get caught up on corners. Buttons on the character creation screen failed to work. Walking around in the wrong areas could cause the game to become Unintentionally Unwinnable.

Gradually, Heuristic park patched Dungeon Lords up to version 1.5, which fixed many of the bugs and expanded the adventure to include multiple side quests and enhanced character creation options. This "Collector's Edition" release was now technically playable, but by this time, Dungeon Lords was already a critical and commercial failure. Worse yet, there was no way for players to patch their game up to the more functional version, so those early adopters essentially had to buy the same game twice.

Rather than list what went wrong with it, it's easier to describe the good things in this game. The character progression system is point- and level-based, meaning a wizard can buy wizard skills cheaper than armour skills but still get both—in practice, this means that characters become do-it-all übermenschen with ridiculous powersets by mid-game. Combat is action based, with shield blocking and tactical movement being as important as stat growth, and the dungeons are immersive and interesting.

For a time, a Dungeon Lords 2 was in development, still trying to pioneer Bradley's vision. Development was put on hold indefinitely in late 2009, and that was the last anything was ever said of the matter.

Then in April 2012 came the surprise announcement that David W. Bradley was working on a remastered version of the game retitled Dungeon Lords MMXII, sporting updated updated graphics, reworked classes and new contents. The game was released in Europe on September 2012, around the same time as Torchlight II, but didn't see the light of day in North America until a surprise release on Steam in December of 2015.

This is also not to be confused with the European board game Dungeon Lords, which takes more after Dungeon Keeper.

Dungeon Lords has examples of the following tropes: