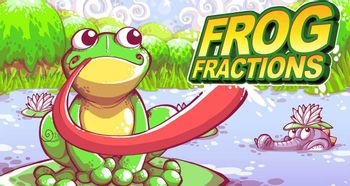 is a Flash Game from Twin Beard Studios that parodies the everloving hell out of Edutainment Games, among other things.
Advertisement:

You start as a frog sitting in a pond trying to keep bugs from eating your fruit. Eating bugs scores you points (which are expressed in fractions), and you have to collect the fruit when it ripens and falls off the vine (a tall order, since your character can't move back and forth right away). The fruit you do collect you can spend on power-ups (some of which are seemingly prohibitively expensive and sold in a currency you don't have), and as you do so you discover hints that there's more to this game beyond this little frog's pond.

"Discovery" is a big theme of the game, according to Word of God, and as you play you'll discover all sorts of nonsense we'll try not to spoil here.

Kickstarted and turned into an ARG that spanned two years. In December 2016 it was finally released and discovered, included as a secret in a children's game by the name of Glittermitten Grove.

In August 2020, the first game was re-released on Steam as Frog Fractions: Game of the Decade Edition, alongside $10 cosmetic DLC... that's actually an entirely separate game taking place after the original Frog Fractions.

Tropes fractioned in the first game include:

Tropes fractioned in Frog Fractions 2 include: