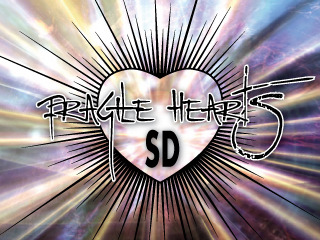 Fragile Hearts is a series of freeware parody RPGs, made in RPG Maker by SBester. It currently consists of two games, with a total of five planned out.

The first game begins with Fergus, a rather mediocre knight who accidentally kills the princess he’s supposed to be marrying. He instantly becomes a hunted man, but this soon becomes least of the kingdom’s problems as an Evil Overlord manages to break the spell containing him and return with an evil army. Fergus soon joins forces with Haddy, a young and unemployed witch, her formerly human, foul-mouthed talking cat Gulliver, and Midard, a once-mighty wizard now crippled by dementia. Together, they end up the kingdom’s only hope to defeating Evil Overlord.

The sequel, Fragile Hearts 2: Shattered Dreams, was released in 2013, a year after the original. In-universe, however, 3 years have passed, and some of the choices made in the original game are carried over into the new one. This time, the world is threatened by the potential rise of a Demon-King, who is due to be born after a naive angel Meera and cynical demon Bazur end up in bed together after a drunken night. Meanwhile, Haddy’s younger sister, Maddy, ends up the lone survivor of an assault at Witches Academy by a Cameltoe army intent to rid the world of magic users, and who are looking for a person chosen to defeat the Demon-King, purely so that they can lure the remainder of witches into their trap alongside him. Little do they know that the chosen one is Tobin, a young transgender person who’s been under their nose all along...

Both games are available in a single download here