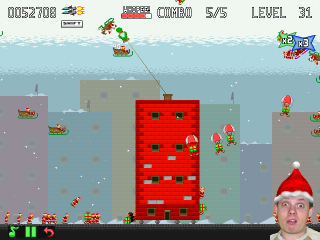 Words fail to describe this game.

Daniel Remar: Don't ask why. Ask why not.
Ludosity: It's pretty much impossible to describe this game. Here's a quote from one player:
M3nTo5: At first I was wtf. But then I was wtf.

An arcade game by Daniel Remar.

You install the wheels below your house, modify the remote to control them, and tie yourself to the chimney with the rope. Then, you proceed to swing around to shake the elves off, supported by your trusty cat, a princess and lots of explosions.

The game's old download version and trailer can be found here

. The Flash Updated Re-release can be played here

. A spin-off-game called Hyper Princess Pitch (heavily inspired by Operation Carnage in means of gameplay) has been released at the beginning of December 2011.