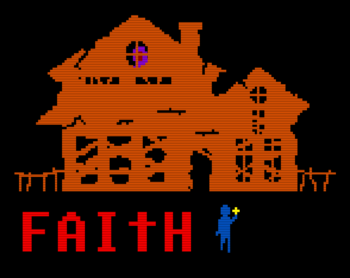 The power of Christ compels you.
September 21, 1987.
It's been one year since I first went inside that house.
I have to finish what I started.
What I am about to do has not been approved by the Vatican.
—John Ward
Advertisement:

is a free Retraux indie horror game developed by Airdorf Games and published by New Blood Interactive about Demonic Possession and Hollywood Exorcism.

Connecticut, 1986. Amy, the daughter of the Martin family, has been acting strangely, and her parents fear that she might be possessed by a demon. To save her, they turn to the Catholic Church, who send a pair of exorcists, Father Allred and John Ward, to investigate the case, and if necessary, exorcise Amy.

One year later, Ward, the Sole Survivor, returns to the house. His goal: to put an end to the horror he failed to stop. What might otherwise be a simple exorcism, however, becomes a life-threatening nightmare, and Ward must search for answers while braving the wrath of a demonic presence, all to save a single soul... or so it seems.

A third Chapter is confirmed to be in development, with a demo being released Halloween 2019. All three games will be bundled together on Steam

and published by New Blood Interactive, where one can download the first game and demos for the sequels.

The following Tropes have not been approved by the Vatican: