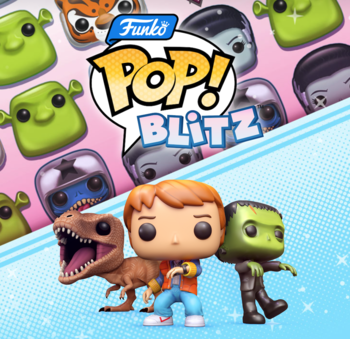 Funko Pop! Blitz is a free-to-play Match-Three Game on iOS and Android devices. It was originally created by NBCUniversal, but switched over to N3TWORK in collaboration with Tic Toc Games after the closure of NBCUniversal’s video game branch. It was officially released on September 30th, 2020.

The game is focused around Funko Pop! versions of various existing characters. Many are characters owned by Universal and their subsidies, though there are a few random other franchises and Funko-original series as well. The game itself plays like a basic match-three game, with a designated character to unlock a special ability.

Various combinations of matching yield different power-ups for the game:

Unique to the game is that each selected character has their own high score, rather than a combined high score per account. This tallies up to a Mega Score, which fills a meter to receive rewards, including exclusively unlockable Pops.

Some Pops are also exclusive to five-day-long events, which involves dropping items down or clearing tiles. Filling a meter with collected items nets exclusive characters, some of which can also be found in a higher-cost event box. After the event, some characters can return as non-event "filler" Pops for the event boxes for a chance to get them again.

Each character also has exclusive stickers, which are meant to be dropped down from the top of the board. Collecting a certain amount of each sticker increases the Pop’s damage amount.