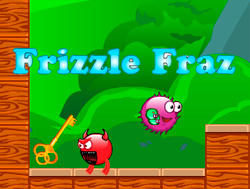 Frizzle Fraz is a series of popular Adobe Flash platform games created by Spillgames. The series is well known for introducing a lot of people to flash games and casual gaming as a whole. The games in general tend to follow you playing as a creature called Big Frizzle(often nicknamed by the fans Frazzle) who sets off on a journey to rescue little Frizzles from danger. The series's popularity has lead to a reboot and a mobile adaptation.

The original Frizzle Fraz starred you playing as Big Frizzle as he had to rescue his little frizzle friends from creatures called nasties (which consist of devil looking nasties and piranha looking nasties)and collect all of the keys to the complete the level. The game was a surprise hit and served as a game that got quite a few people in to flash games. It eventually got a sequel called Frizzle Fraz 2 which saw Frazzle getting thrown into a completely different world from the first game and having to collect the little frizzles to return home. The gameplay has a lot more exploration in comparison to the first and the game was in general warmly received and is considered an improvement over the original. Frizzle Fraz 3 came out not so long after and featured very few changes from the second game serving as more or less a Mission-Pack Sequel. Frizzle Fraz 4 came out then to close out the original series featuring the characters thrown into a frozen location and for the first time seeing the next level unlocked by collecting the little frizzles instead of keys.

After that a reboot was launched with the characters being redesigned to be more adorable (much to the chagrin of the fanbase). It started with a mobile game adaptation seeing Frazzle being thrown into an even more different world inspired by a jungle. It was followed by a direct sequel Frizzle Fraz 5 (which was a flash game like the games before the mobile game) which featured a desert inspired location and turned up the difficulty. It was followed by the latest entry in the series Frizzle Fraz 6 which takes place entirely underwater.