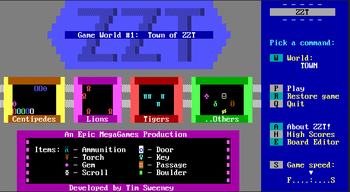 ZZT is an MS-DOS shareware computer game created by Tim Sweeney and released on January 15th, 1991 under the one-man label of Potomac Computer Systems. Across a series of four worlds, with Town of ZZT as the shareware world, the player controls a white-on-blue smiley face in a world on a tile-based grid, in which it can move and shoot in four directions, use torches to light its way in dark places, and touch objects to interact with them. Even by the standards of 1991, the game was technologically simple, exclusively using text-mode color graphics and PC speaker sound.
Advertisement:

What it had unlike other games, however, was its selling point: an internal world editor. Simply by pressing the "E" key on the main menu, the player could begin creating their own worlds. Not only could they place all the items, creatures, terrains, and other elements they saw in the official worlds, but they could use a simple scripting language, ZZT-OOP, to program "objects" to do whatever they wished. The combination of ZZT's abstract graphics and ease of use allowed players of any age group, from children to adults, to create and share their own games regardless of skill level, contributing to its explosive success in the shareware era.

The success of ZZT was such that it allowed Tim Sweeney to fund further game development, and build up his company into what is today known as Epic Games. Decades after its peak, ZZT, now freeware, maintains a small but healthy community of both enthusiasts and new creators alike, creating new worlds to this very day. External editors such as KevEdit and ZEdit2 now make it easier than ever to make new games for the engine, and the emulator Zeta

allows the game to be played on modern computers, including in your web browser. In 2020, a fan reverse-engineered ZZT to reconstruct its source code, which Sweeney admitted to have lost, and released the result under the MIT License with his blessing as "The Reconstruction of ZZT

", allowing anyone to create their own fork of the engine customized to their liking. The Museum of ZZT

is the current hub of the community, dedicated to not only documenting the game's history (with over 3,000 games hosted as of this writing), but publishing new worlds.

A sequel, Super ZZT, was released in October 1991, with new features such as an expanded board size, a scrolling viewport, special "stone" items that enable custom HUD displays, and the ability to place items in more colors than what the ZZT editor could provide without fanmade workarounds. However, it fared worse than its predecessor on account of its squished display and the fact that the editor was locked away by default unless the user ran the game with the command line argument "/e". Even now, there are much fewer Super ZZT worlds compared to ZZT worlds, though it is slowly growing as the years go by.

General tropes associated with the engine: