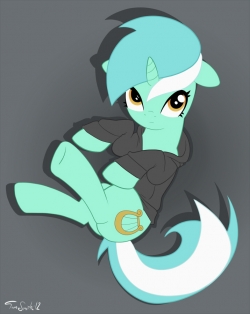 The most forgettable pony ever.
My name is Lyra Heartstrings, and you will not remember me. You won't even remember this conversation. Just like with everypony else I've ever met, everything I do or say will be forgotten...
Advertisement:

is a fanfic based on My Little Pony: Friendship Is Magic, by shortskirtsandexplosions.

Lyra isn't a normal pony. She went to Ponyville to celebrate the Summer Sun Celebration with her foal-hood friend, but instead found herself living a cursed life. Upon her arrival, Nightmare Moon did.... something to the unicorn. Everypony forgets about her within minutes of meeting her. Nopony can read her writing. Any evidence of her existence disappears or is dismissed. Any attempts to leave town cause her to collapse underneath the most painful cold imaginable...

Now trapped in a world where she has as much presence as a half-remembered melody, Lyra must find a way to undo her curse. Her only clue is a series of enchanted songs that keep running through her head....

Now in the process of being adapted into comic form.