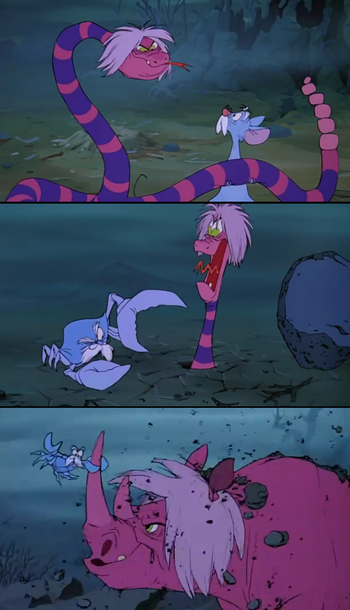 "It's a battle of wits. The players change themselves into different things in an attempt to destroy one another."
Merlin: N-now, Mim, no dragons, remember?!
Madam Mim: Did I say no purple dragons? DID I?
— The Sword in the Stone
Advertisement:

There's nothing quite like the awesome brought to bear when a hero goes into battle with — or as — a Shapeshifter, as they change forms and faces, grow weapons and limbs, or use camouflage to hide and strike.

When two shapeshifters fight the only thing holding them back is their imagination and the versatility of their shape shifting abilities. Two similarly gifted shape shifters can play a deadly escalating game of Cat and Mouse and Dog and Cougar and Manticore and Phoenix until one is finally outwitted and defeated by a form they just can't counter. Indeed, this is pretty much the only way for a shapeshifter duel to end. When compared with a normal fight, and even ignoring the Healing Factor issue, using blunt force trauma to win seems passé and overly prosaic. The winner is not necessarily the one who manages to get the biggest form; wits are more useful than brute force.

Alternately, the combatants will turn each other into undesirable forms to try to get the upper hand. This is usually Played for Laughs.

This is a recurring theme in myths and folklore, and is at least Older Than Print; folklorists call it a "transformation chase". There are a number of Celtic ballads, in particular, where a suitor pursues his chosen bride through a series of forms before she consents to marry.

Transforming Mecha can often do a variant of this, but as they only have a set number of modes, they're allowed to pair up versatility with firepower.