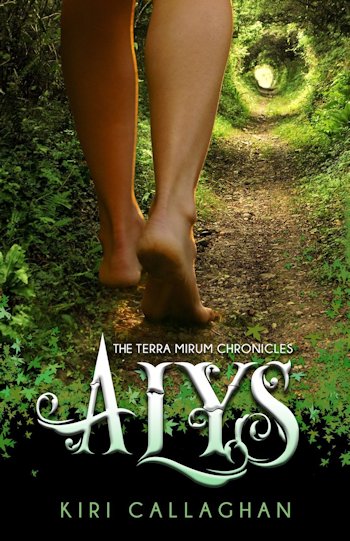 She raised a hand to her mouth. He raised a gun to his.
Written by Kiri Callaghan

, The Terra Mirum Chronicles are a series of stories set in the eponymous Terra Mirum, the land of dreams that humans typically only visit in their sleep. Some humans, however, are able to see the creatures of this land during their waking hours. They are the Dreamers. The lucky among them become creators: artists and storytellers and the like. The unlucky range from those thought to have overactive imaginations to the insane.

The first novella Alys published in August 2013 is a dark retelling of Alice's Adventures in Wonderland. Alyson Carroll and Charlie Lewis have been best friends since they were in second grade. Shunned by family who don't understand them, they have big plans to run away from their small-town life in Appleweed to live in Seattle, and they've been saving up in order to make the move. However, when Charlie suddenly commits suicide, Alys is left adrift. Realizing that she has nothing left to keep her in town but an abusive, alcoholic mother, she decides she's going off to the big city on her own.

Meanwhile in Terra Mirum, the prince Oswin awakes to the hostile takeover of the palace by a Nightmare from the Nothing. The creature murders his mother, enslaves his father, and imprisons Oswin. He narrowly manages to escape, taking a detour into the human world to throw the Nightmare off his trail. Things take an interesting turn for the both of them when Oswin's sudden appearance drives Alys off the road and, unable to resist her deep curiosity, she follows him into Terra Mirum. What ensues is a fantasy adventure entwined with Alys's struggles with her inner demons.

The Terra Mirum Chronicles include examples of the following tropes