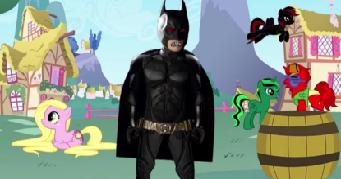 My Little Pony Meets is a fanmade animated web series created by Logan Miller, aka ToucanLDM.

It's a crossover between the animated TV series My Little Pony: Friendship Is Magic and... pretty much everything else.

Hilarity Ensues when characters from various franchises wind up in Equestria- or in a few cases, when ponies travel to other worlds. The circumstances are usually mysterious, the stakes high, and the method by which the characters make the jump between universes is often unexplained.

The first episode was released on August 12, 2012. There are currently 23 episodes in total. The series so far can be viewed here