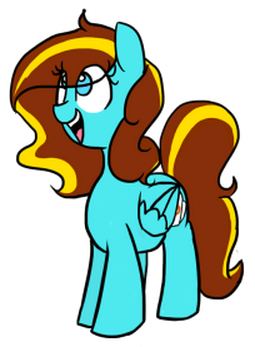 ILoveKimPossibleAlot (KP) is one of the many My Little Pony generation 4 analysts.

She is known in the community for her humor-based, short, and heavily stylized analysis videos that are chock full of pop culture references and Discord fangirling.

Her OC is a blue pegasus with a two-tone (yellow and light brown) mane.

The main gist of her videos, besides a few varied animations, consists of My Little Review — where she reviews specific episodes of My Little Pony: Friendship Is Magic as well as some fan works — and Analysis Is Magic — where she more closely examines some specific aspects of the show.

Also an infrequent part of the Bronies React roster, and the BLU Scout on TF2 Analysis.

. She also has a deviantART page