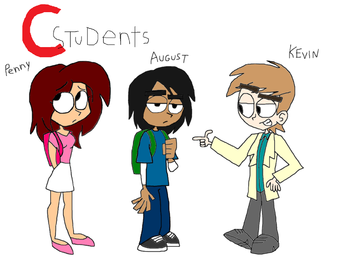 Penny: I got a C...
August: Oh... Well, when you put it like that you make it seem like the worst thing ever.
Kevin: You got a C too? Wow. And here I thought you were smart.
Advertisement:

C Students is a 2014 animated web series created by AnimatedJames

on YouTube. The story focuses on the three main characters August, Penny, and Kevin, three friends just trying to make their way through high school and all its perils, including, but not limited to: Alpha Bitches, relationships, sex, insane teachers, creepy twins, Italian bullies, swearing, and Chuck Jones cartoon physics.

C Students is based on an 11 minute short called Cancer Crusaders. Cancer Crusaders was intended as the pilot to a series called Seniors. Seniors was about seven main characters, all high school seniors, and were fictitious versions of the voice actors themselves. Being an independent project, however, Seniors went through Development Hell because of many factors, including voice actors taking forever to record their lines, recording their lines with very poor hardware, AnimatedJames not hearing back from the people involved for months at a time, and many more. Because of this, AnimatedJames decided to cancel Seniors, and give it new life in the form of C Students, which is supposed to be easier to manage and create, having fewer people involved.

The series was cancelled in an announcement from AnimatedJames during March of 2015, as he felt that he was ignorant about the subject of friendship. Since then, no remakes have been announced, and only a pilot and some of episode two have been released. Later, on February 2, 2016, AnimatedJames made a new animation, a music video called "Creative Types"

, which featured the characters of C Students a few years later.

Later the same month, it was announced that the characters who appear in Creative Types would be the focus of a Web Comic.

, one of AnimatedJames's fans, has announced that a new animated remake of C Students is in production by his animation studio Sharpness Knight Studios

, but unlike the original pilot, the new remake is going to be suitable for children. The remake is in development, so Sharpness Knight, who is the developer for the remake, is looking for animators and voice actors (including the original creator AnimatedJames himself) to help out with the remake. Later the same month, he uploaded two videos for the new C Students remake, which are the sneak peek (with archived footage from the original pilot)

and the new intro

. In that video, the animated C Students web series remake project, which was in development hell, is looking for animators, voice actors, and other people to help Sharpness Knight with the story, animation, video editing, voice acting, music, sound effects, visual effects, and compositing, and is going to be a tribute to the original C Students pilot episode "Pylit". However, on November 22, 2017, he claimed that production for the C Students remake was canceled

due to lack of animators and support, as well as being told a family-friendly version of the show would be a bad idea.

On December 9, 2017, after the cancellation of the animated C Students web series remake, Sharpness Knight decided to create a series of animated YouTube short films based on C Students. The name of that series is C Students Shorts. The short film series began with "Kevin's New Outfit"

, which is the very first short of that series. In that short film, Kevin is choosing an outfit for his first day at Hartlane High School as a senior student. The short took place before the events of the original C Students pilot episode "Pylit".