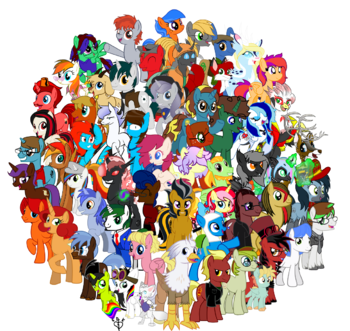 . Used with permission.note See actual image for links to dA pages of personalities in the pic.

MLP Analysis (also known as "Bronalysis") is the name given to a collection of internet personalities who study and review episodes, fanworks, themes, characters and settings of the popular animated series My Little Pony: Friendship Is Magic, as well as elements of the fandom. In addition, they also review MLP episodes as well as fan projects. Most of them speak through pony OC's of themselves.

The trend originally began from the rise to popularity of Digibronote Who has since retired and is now an anime analyst, in early 2013/late 2012.

While they are a rather large and diverse group, they do have several well-known members: