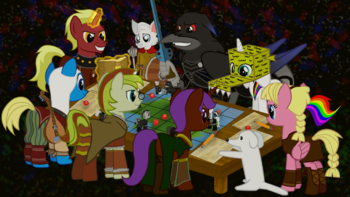 Players and their characters clockwise from top left: Commander Firebrand as Jeminya, Dr Wolf as Oin, Lunacorva as Ravvas, Lightning Bliss as Amber, Sweetie Bloom as Rose, Eliyora as Faerthurin, Voice of Reason as Jalerom, and Finn the Pony asIvan. Old image had ToonKriticY2K as Kross between Oin and Amber.
Brony Dungeons and Dragons is a series of videos on YouTube showcasing several members of the Brony MLP Analysis community playing a Dungeons and Dragons (3.5 edition) tabletop roleplaying game created by Josh Scorcher, the Dungeon Master.

. Josh Scorcher is the Dungeon Master of the game as well as the player for the character of Jeminya and other Non-Player Characters. The other characters are played by Dr Wolf (channel host)

. The campaign also once included a character played by ToonKriticY2K, who was written out from Episode 66 onwards due to certain events.

The setting is the fantasy realm of Alatastica where the playable characters find their way through many challenging encounters and conflicts both physical and emotional. There is Oin Lightbringer, a dwarven cleric, played by Dr Wolf

; Ivan Windstrummer, a gnome bard, played by Finn the Pony

; Jalerom Tanlaial, a half-elf rogue, played by Voice of Reason

. Kross Dalgo, a saurian ranger, played by Toon Kritic was originally part of the party, but due to certain real life events, Toon was banned from the project and Josh the Dungeon Master informed the audience that Kross would be written out of the story once all parts Toon took part in had been posted. In season 3, Ravvas Arkanen, a Drow Warblade/Crusader played by Lunacorva

joins the party. The party also has three animal companions played in part by the Dungeon Master and the players they belong to. They are Lucid the raven, familiar to Faethurin; Shiloh the riding dog, companion to Rose; and Jaylen the golden viper, companion to Kross.

The playlist of the series so far can be found here

. A collection of fan art for the series can be found here

. (Beware spoilers for Jeminya and Simula)

using the Tyranny of Dragons has started airing on Josh's channel. It stars Josh's brother, jerethbane

Welcome to the Show contains examples of: