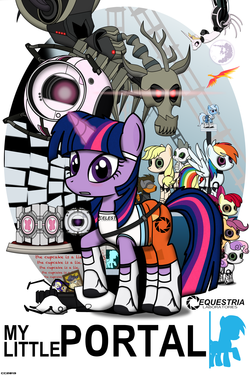 It's OK, lads. You can like the cute test subjects and A.I.s.
The cupcake is a lie.
Advertisement:

My Little Portal is a fanmade animated web series created by Christian David Cerda. It is a crossover between the animated TV series My Little Pony: Friendship Is Magic and the video game Portal.

A grave mishap with the Equestria Laboratories scientific research facility's newest artificial intelligence, DISCoRD, forces Princess Celestia to relocate the facility to the moon. Celestia's faithful student Twilight Sparkle is more than happy to go to the new Celestia Laboratories to help put things in order—and then she wakes up from cryogenic sleep at the lunar facility ten years later with no memory of who she is or why she's there.

DISCoRD has now overrun Celestia Laboratories, and the original AI, CELesTIA, needs Twilight's help to restore order. Armed only with her wits, magic, and a Hoofheld Portal Device, Twilight navigates the facility alongside mechanized versions of her forgotten friends to find the Elements of Harmony and stop DISCoRD. As they overcome DISCoRD's obstacle-ridden "test" chambers, they will discover what exactly happened at the facility—and to themselves—over the last ten years.

The first episode was released on July 6, 2012. There are currently ten episodes in total. The series so far can be viewed here

This series has been featured on Equestria Daily and Kotaku