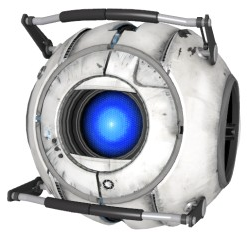 "He's not just a regular moron. He's the product of the greatest minds of a generation working together with the express purpose of building the dumbest moron who ever lived."
—GLaDOS, on me.
Wait, wait, wait. How did this get here? Seriously, don't trust her.
Advertisement:

So, yeah! This is my page. It's, um, very nice. A little bit sparse? But y'know, I'm working on it. Why don't you go ahead and read it? I mean, it's no Machiavelli- which I've read, by the way, I can literally read - but it's interesting! Very interesting. You'll notice it's a great deal more readable than Her page, 'cause I'm not changing the capitalization or the little teensy writing style every third letter or so. Nope, not good ol' Wheatley! Consistency is my middle name. ...Though, actually, I don't have a last name, so I can't really have a middle name either, so... yeah.

Anyway, you just sit back, read in comfort, and imagine that I'm talking to you in the kind of smooth, chipper Bristolian accent you might associate with very tall, very blonde, very... um... bespectacled, British comedians. Or a very talented YouTuber.

I'm a robot! Personality Construct, to be precise. Very fancy. I come from the Aperture Science Computer-Aided Enrichment Center, which, again, I'm a computer, I aid...uh, and I've had a lot of jobs! Biggest one was watching all the humans in cryo-sleep. I did that, uh, for a couple of hundred years, possibly thousands, didn't exactly set a timer or anything, which, in retrospect, might actually have been why all the humans died.

...except one! So we teamed up! You know! We had the brains! We had the beauty! And you know! She was also involved, helping me out! Kicked Her right in Her massive metal behind! And, then...some other stuff happened, down the way, but that's basically it!

Also, on an unrelated note, anyone kind enough to conduct some kind of space rescue mission for me or if someone happens to pass by near the moon, here are my coordinates

. Oh, also, if you see a tiny plastic block figure that looks like me, ask him how he got out of space.

Wait, what? Why are those words invisible? Hold on, just wait a bit I can fix it... wait a bit... I can... ... Err... while we're waiting, why don't you feel free to highlight that line? Trust me, there's no spoiler in that spoiler tag. Especially big endgame spoilers about myself. Hey, there it is again! Wonder why that is? note  GLaDOS: THEY're spoilers YOU idiot. Hey! Who let her in here?!

What's a trope? Is this a trope? ...These are tropes, aren't they. Ooh. My bad, my bad. Blame me. Blame the innocent little core. Just like humans.