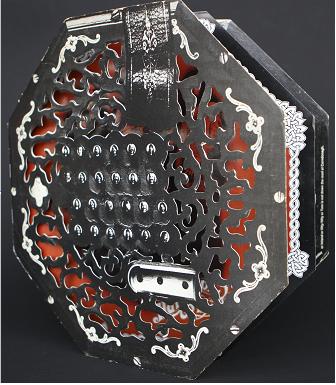 Packaged as Other Medium - their first album sleeve, Happy to Meet, Sorry To Part
Advertisement:

Horslips were an Irish Celtic rock band that composed, arranged and performed based on traditional Irish jigs and reels. The band members were working in an advertising agency design studio in Dublin when they were prevailed upon to act the part of a rock band for a commercial. They enjoyed the experience so much that they pressganged a keyboard player and set about doing it for real, adopting a fusion of traditional Irish music with rock music. While semi-retired now, they can rightly claim to have inspired many local and international acts.

The group formed in 1970 and "retired" in 1980 for an extended period. The name is a wordplay in the best traditions of Flann O'Brien or James Joyce: it originated from a spoonerism of "The Four Horsemen of the Apocalypse" as "The Four Poxmen of the Horslypse".The group is regarded as 'founding fathers of Celtic rock' for their achievement and oeuvre.

Most notable works by this group:-

This group and their albums provide examples of: