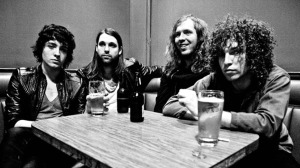 Some days the reaper ain't looking so grim; some days the past is the only mine that has gold.
—"Nobody's Accusing You (Of Having A Good Time)" Hot Hot Heat
Advertisement:

Hot Hot Heat are a new-wavy, Canadian dance-punk band from Victoria, British Columbia formed in 1999. They're known for their catchy, frantic songs and witty lyrics. Although not overtly popular in the mainstream, they've had a few chart-climbing singles and maintain a dedicated fanbase. Extremely hook-laden songs await.