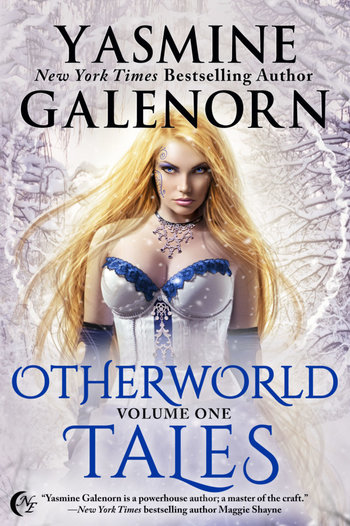 The Otherworld Series is an Urban Fantasy/Paranormal Romance series by Yasmine Galenorn. Not to be confused with the fantasy novel series, science fiction series or fanfic of the same name. For tropes associated with otherworlds, see Otherworld Tropes.

The D'Artigo sisters are three half-human, half-Fae members of the Otherworld Intelligence Service. Camille is a witch, Delilah is a werecat, and Menolly is a vampire. Unfortunately, their half-human heritage tends to make their magic malfunction at inopportune moments, and they've acquired a reputation for incompetence that gets them assigned to Earth, where the existence of Fae and the Otherworld has recently become public knowledge.

However, what is supposed to be a boring assignment where their bumbling won't do any harm turns serious when they learn that a powerful demon lord, Shadow Wing, is seeking nine Cosmic Keystones that will allow him to break the barriers between the worlds and conquer the Earth. With the Otherworld authorities in disarray due to insurrections against the opium-addled queen, the D'Artigo sisters and their assorted allies are the only ones standing in the way of Shadow Wing's conquest.

Books in the series so far include: