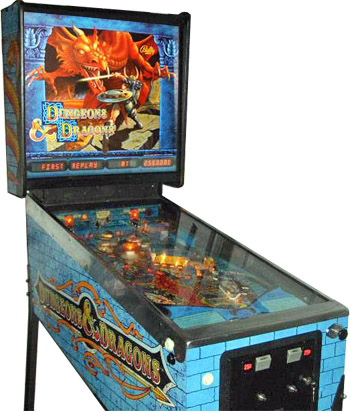 A pinball with a built-in saving throw!
"Mystical Million!"
Advertisement:

Dungeons & Dragons is an arcade pinball game designed by Ward Pemberton with art by Larry Elmore, released in 1987 by Bally.

As one would expect, this game is based on the world-famous role-playing game from TSR. The player must lead a party of four adventurers — a Warrior, a Valkyrie, a Wizard, and a Dwarf — up a castle, where a fire-breathing red dragon awaits. Use the shield, sword, and magic dust to douse the flame, then enter the Dragon's Lair to claim the treasure. Ascend the dungeon's levels for more rewards, but beware of the Teleporters, which will magically move your pinballs across the table. Use the Magic Save to avert a draining ball, then use magic to summon backup for three-ball multiball.

Dungeons & Dragons was released during shaky times for Bally; this was an attempt to revitalize the company with a game that was both visually attractive and challenging to play. Unfortunately, while it is a challenging game that requires expert skills to master, some of the shots are too dependent on lucky random bounces, which detract somewhat from its appeal. It's rather popular among some collectors, but only 2,000 tables were manufactured, and the money-saving wood fiberboard cabinets made them more susceptible to aging.