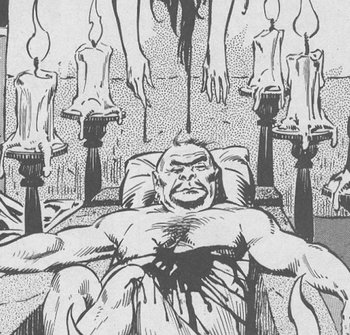 Numedides prefers blood showers to Blood Baths.
"Infidel defilers. They shall all drown in lakes of blood. Now they will know why they are afraid of the dark. Now they will learn why they fear the night."
—Thulsa Doom, Conan the Barbarian (1982)
Advertisement:

The Conan the Barbarian franchise had no shortage of evil sorcerers, cruel tyrants, or bloodthirsty brutes. However, some have managed to stand out even among this bad lot as the most heinous villains possible.

In each group, entries are by publication/release date.